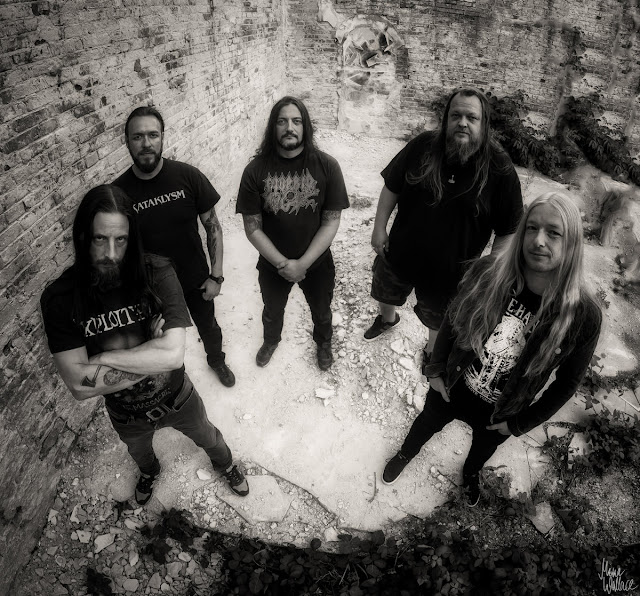 A few questions - interview with death metal band from Germany - PURE MASSACRE.
Answered Christian Ulbrich (guitars), thank you!
Ave, can you introduce your band to our readers? – When was it founded and what style of music do you play etc.?
Hi Jakub,
Michael ( vox), Alexander (dr) and me (git) are from Zerbst a small town in Saxony anhalt between Dessau and Magdeburg.
We three know each other for about 30 years and make music for over 20 years . mainly Death Metal.
Pure Massacre was founded sometime in 2013 after our previous band broke up.
After some changes on guitar and bass, came in 2017 patrick on lead guitar and 2018 michael on bass in the band.
Since then, the lineup is unchanged with what all are very happy.
Where and under what conditions were you recording the new album? Who was in charge of sound, production and mastering?
We recorded the album at Soundart recording in Rosslau.
unfortunately it took 1.5 years because of Corona and other difficulties.
At Soundart alex Lysjakov was responsible for the recordings.
Jörg Uken from soundlodge was responsible for the mix and master. We are very satisfied with his work.
How many copies were released and which medium was used for this new edition (CD, digital, vinyl, cassette)?
The album is limited to 500 pieces.
It was released by martin Quast via Neckbreaker records. The CDs are hand-numbered like all his releases.
There will also be vinyl in an edition of 333 where there will be 111 black and 222 colored.
Due to the situation with delivery problems and the like, it will take some time until it is ready.
You can listen to the songs on bandcamp and youtube and eventually it will also be on spotify.
Who is the author of the lyrics and how were they created and about what do the lyrics deal with?
Michael our singer is responsible for all lyrics.
The lyrics are partly about war, false promises of people from politics and religion with their fatal effects for individuals or society.
Who created the logo of the band, and who took care of the graphics and the website?
The logo is from our singer Michael. The cover of the single and the album with all graphics are by Vladimir " smerdulak" Chebakov, who is also responsible for all shirt designs.
What about you and social networks? Do you consider these things important?
Yes, that is an advantage, especially to draw attention to publications or concerts. without that, for example, the contact to Vladimir would never have come about. 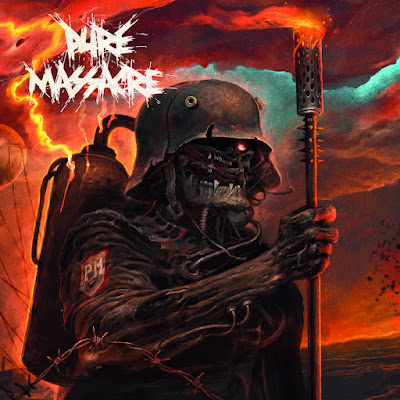 Which label did you choose for releasing your album and why this label? Are you satisfied by how your label represents you and takés care about you?
Basically, we only wrote to 2 labels. Testimony and Neckbreaker.
The former didn't want us and Martin from Neckbreaker was enthusiastic.
The decision for Neckbreaker was then logical.
Especially since he is also from Magdeburg and is therefore in the immediate vicinity.
Which bands do you idolise and where do you get your inspiration?
Oh that is very different for all of us. It ranges from Florida Death Metal to Scandinavian Death and Black Metal, to Paradise Lost, My Dying Bride, Katatonia the Ramones, The Exploited, the big 4 and many many more.
Did you send your record to some Labels - which are the labels? How was the response?
Yes, as I said, there were only 2 labels.
How many gigs have you played? Which type of gigs do you prefer, whether it's (clubs or festivals) and which of your performances would you consider as the best?
We play about 10 concerts a year.
The last 2 years weren't easy.
The feedback was very good. especially at the in flammen open air and in Bitterfeld.
The main thing is that we and the people who come have a good time and have fun.
It's really not about more.
What about your plans for the future? What do you want to achieve with the band?
For the future we want to play concerts as often as we can in terms of time, family and work.
also outside of Germany.
And at some point record the follow-up to our album.
How and where can your fans contact you? Can you provide some contact information?
We can be reached via facebook, bandcamp and youtube.
https://www.facebook.com/puremassacre.germany/
https://puremassacre1.bandcamp.com/
https://www.youtube.com/channel/UCtN8DUfUkdiVZ_DBkpi7jtw
Thanx for the interview.